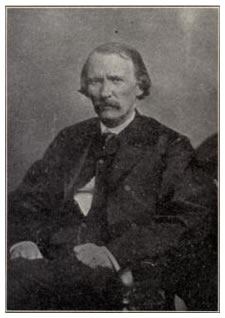 The 1st New Mexico Volunteer Infantry was organized in July of 1861 in response to the Texas threat of invasion of the territory. The various companies were initially militia companies, all led by experienced frontier fighters. The regiment was first formed as a mounted rifle unit but was quickly transferred into infantry. Christopher "Kit" Carson eventually was appointed the colonel of the regiment.

The unit received its instruction and equipment at Fort Union, and several companies were quickly pressed into protecting the vital Santa Fe Trail.  Other units were utilized building the new star fort at Ft. Union.  Uniforms were often slow in reaching the men, and weapons and equipment was often old surplus from the vast storage facility at the fort. Nearly all the men were native nuevo Mejicanos, few could speak English, but nearly all were experienced Indian campaigners.

The unit was transferred to Fr. Craig just before the Battle of Valverde.  The unit did well and were pushing back the foe on their right when ordered to retreat.  Their composed march in retreat impressed the Rebels who assumed they were US Regulars.

The regiment was used for garrison duties and patrols.  When the danger of a Confederate invasion faded after the Union victory at Peralta, the 1st New Mexico Volunteer Infantry was recomposed and changed into cavalry.  Other New Mexico units were consolidated into the new 1st New Mexico Infantry.  This unit had companies scattered throughout the southwest, from what would become the Territory of Arizona, all the way to Kansas.  The volunteers protected settlers, guarded wagon trains, patrolled for Confederate and hostile native Americans.

Some units continued serving until 1867, nearly two years after the Civil War ended back east.